We are getting rolled, and I am tired of it!

Complacency and apathy are destroying our Church and our world!!!

However, a diocesan spokesman said employees will be warned against using the benefit and that open defiance of Catholic teaching on the issue could ultimately lead to termination.

St. Mary’s Hospital in Madison has notified employees that it, too, soon will be required for the first time to cover contraception.

Both entities sought to get around the mandate by becoming self-insured, but the costs proved prohibitive.

The law, which took effect Jan. 1, requires all commercial insurance policies with a drug benefit to cover prescription contraceptives. Self-insured policies are exempt.

The law allowed employers to honor their current insurance contracts until they expire, which is why the diocese had until Aug. 1 to make a decision. Officials decided a self-insured plan wasn’t financially feasible, said Brent King, a diocesan spokesman.

The diocese’s commercial insurance policy now will offer birth-control coverage, but employees will be expected to employ their consciences in not using it, King said. “If someone were to misuse that freedom in this regard, it could be grounds for termination,” he said.

Such a step would be taken only if the employee, after being counseled, refused to get in line with Catholic teaching, King said. “It wouldn’t be the first thing we do,” he said.

The Catholic Church teaches that contraception is immoral because it diminishes God’s role as the giver of life and interferes with the full giving of each spouse to the other.

All diocesan employees sign a morals clause in their job offers saying they will abide by Catholic teaching, so the diocese expects them to follow the prohibition against prescription contraception, King said. He acknowledged that the diocese has no way to police the issue – an employee would have to offer it up, he said.

St. Mary’s Hospital, a Catholic-based institution, became self-insured eight months ago to avoid the law. But in a July 27 memo to employees, President Frank Byrne said the switch is proving too costly. Also, many hospital employees are having problems accessing specialty medical care, he said.

Byrne said the hospital will work toward getting a religious exemption inserted into the law.

Chris Taylor, public policy director for Planned Parenthood of Wisconsin, said she is pleased with the turn of events but disappointed that institutions would spend energy trying to thwart the law.

“Birth control is basic health care that 95 percent of women use at some point,” she said. “I would hope that we don’t have entities – Catholic or otherwise – trying to erect obstacles to health care for their employees.”

Dietrich Bonhoeffer once said, “Silence in the face of evil is itself evil.”  Make no mistake about it, we are all complicit in the crimes against humanity, common decency and basic moral law if we sit idly by and simply cannot be bothered with the direction the culture is heading. Or, worse yet, vote the purveyors of evil into office. 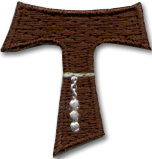 In fact, Wednesday’s first reading speaks directly to this.  Ezekiel 9 talks about the great reckoning about to wipe out Jerusalem.  But first the man clothed with linen carrying a writing case must go ahead to put the mark of the TAU on the foreheads of those who are who are mourning over all the abominations which are being committed in its midst. Those who are marked are to be passed over from the coming destruction wrought by God’s ire.

We are getting rolled, and I am tired of it. The self-indulgent, self-seeking apathy that has become the established norm in our world has removed any source of restraint from those striving for a world of unleashed, soulless hedonism.

This is exactly why I felt inspired to formulate the Knights of Divine Mercy.  In the four years since its inception, it has far exceeded my expectations.  Among the many goals it has accomplished, the KDM ended up being a magnet for men looking for more substance in the practice of their faith.  It has also attracted men who are just as fed up as I am with the wimpy, narcissistic style of Christianity that seems to only be concerned with where it is going to find its next Jesus-buzz, as it condones one intrinsic evil after another.

The Knights of Divine Mercy may be a small army right now (nearly 300 men), but I am confident that this, like many other apostolates for Catholic men, will continue to grow and will begin to make strides in turning this cultural ship around, uniting ourselves with God (conversi ad Deum).

In fact, I believe that one day, like the Holy League in the Battle of Lepanto, we will find a way to join our armies of men’s apostolates to push back the “ism armada” of secularism, narcissicism, atheism, hedonism and every other “ism”  seeking to destroy God and His Church.

It will be the mark of the TAU that will be written on our hearts  … the symbol of hearts that care.  Let’s rally the troops and accept our call to be “Champions of the Tau!!!”

This entry was posted on Thursday, August 12th, 2010 at 8:06 am and is filed under Uncategorized. You can follow any responses to this entry through the RSS 2.0 feed. You can leave a response, or trackback from your own site.

2 Responses to We are getting rolled, and I am tired of it!